2015 Training will return on Monday 5th Janaury with the following revised start times; younger group from 6pm-7pm, the older group from 6.30pm - 7.30pm.

Hope you all have a great Christmas.

Please see our latest news, including details of 2015 membership on our November newsletter below.

The Leinster indoor track & field championships took place over the weekend of 8th & 9th March 2014. Trim AC had a number of athletes competing in both days.
The morning of Day 1 saw 3 of our Juveniles take part in the long jump. Caoimhe Rowe, Emma Rennick and Olivia competed in the U14 girls long jump competition. Despite good performances and a personal best by Caoimhe, none of our girls made it to the final 8 jump off.

Later that morning Alanah Gonslaves jumped in the girls U17 High Jump. The afternoon saw Caoimhe Rowe race in the U14 girls Hurdles. Caoimhe narrowly missed out on qualifying for the final by 1 place.
Trim also had a number of athletes competing in Day 2 of the championships. In the U17 Long Jump, Alanah Gonsalves finished 4th , jumping 4.67 mts,  just 3 cms behind the bronze medal position. Jonathan Nangle ran in the 800mts and finished in 7th place in the final clocking a time of 2.17.35. Emma Rennick ran in the girls U14 60mts sprint, finishing 4th in her heat. 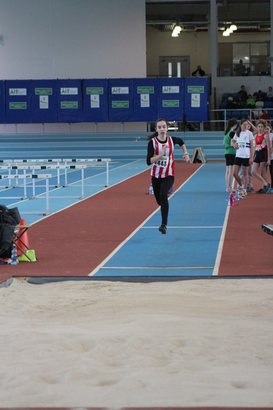 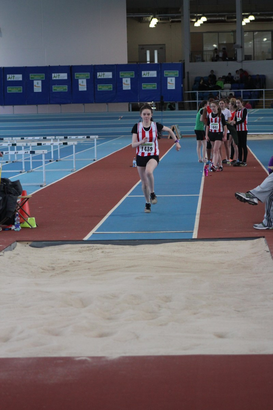 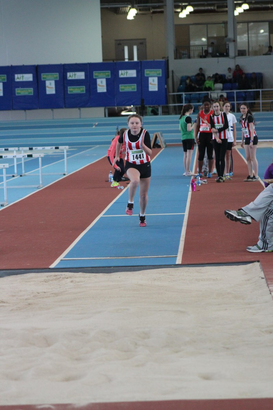 The All Ireland Cross Country Relays took place in Dundalk IT on a very wet, windy and cold day. Hannah Gilligan represented Trim AC in the U14 girls category. It was a very close race on a demanding 500mt course. The Meath team were in medal contention for a long time, but had to settle for 4th place over all. The other members of the team were Amy Clarke, Petra Reilly and Sarah Clarke. Well done to all.

Trials for the Inter County Relays

On Sunday 9th February Fr Murphy AC hosted the  trials to select teams for the Girls and boys under 12 and 14 Inter- County Cross Country Relays. Trim AC had 6 athletes compete in what was a poorly attened event overall. Competing for the club were Boy's U12 - Ciaran McGee, Boys U14 Shane Clarke and Gearóid McGee and Girls U14, Hannah Gilligan, Caoimhe Rowe & Andrea Hiney.

Well done to Hannah Gilligan who qualified to represent  Meath at the All Ireland Inter-County Cross Country relays ( 4 x 500 metres)which will be held at Dundalk IT on Sunday 2nd March.

The schools event took place in Mullingar, in what were very difficult running conditions. The going underfoot was very heavy with a lot of muck and water from the weeks of bad weather. Well done to everyone who took part.

The club had a good turnout for the Cushenstown Indoors on Sunday. There were four events in which our athletes could compete, High Jump, Long Jump, Shot Putt & 60mt Sprints. All our athletes competed in at least 2 events, with some competing in all 4 events.

There was some success with 2 third place finishers. Congratulations to Niam Fahey, who finished 3rd in the High Jump with a clearance of 1.30 mts. Congratiulations also to Ross O'Connor who finished 3rd in his 60mt. Sprint. Katie O'Brien narrowly missed out on a 3rd place, finishing 4th in the High Jump. Well done to all our athletes who took part. 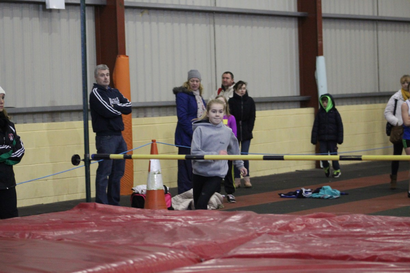 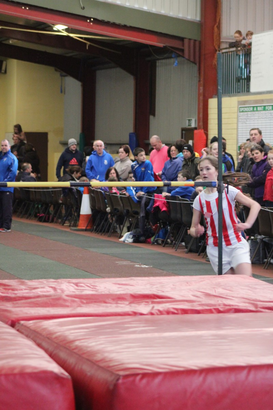 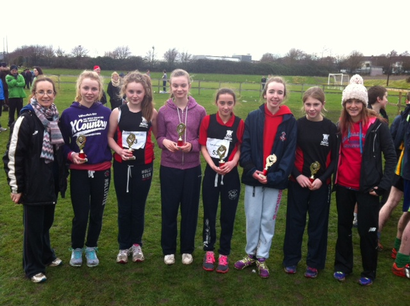 Details of Data Controller are